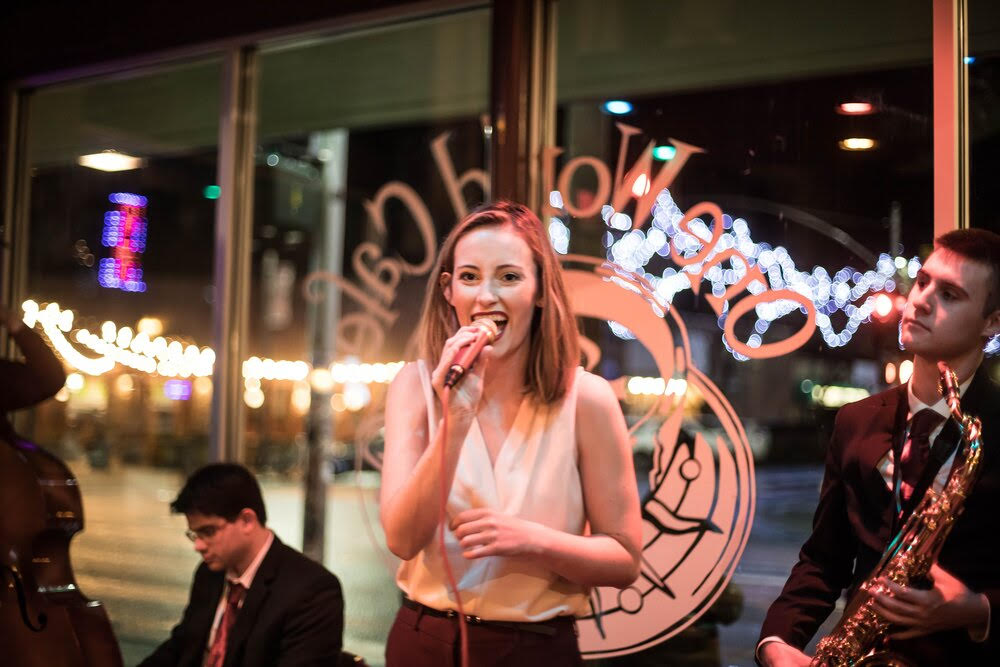 Lara Vivian Smith is an anomaly, incorporating elements from her unique background experiences in performing many musical styles to bear her truth. A composer and vocalist since receiving her first piano at age 7, her unique voice is reflected in her own compositions as well as her intimate interpretations of covers and the Great American Songbook. Integrating her Contemporary, Jazz, and Classical training, from a vividly animated story-teller to a profoundly moving ballad and everything in-between, Lara Vivian is a genuinely innovative artist who can really sing it all.

Born in Chicago, she spent her childhood living in a variety of musical climates, from San Diego to London to Anchorage to the small town of Walla Walla, Washington. In all of these places, she was an active member of a wide variety of community choirs and musical ensembles, even deviating from singing briefly to play the Violin in the Anchorage Honors Youth Orchestra. During her summers at Culver Summer Schools & Camps, she fought to be one of the first young women to join the Drum & Bugle Corps and continued on to represent women as a member of the Upper School men’s Naval Band division. Although initially interested in Contemporary and Commercial Musical Styles, she began formal classical voice lessons at age 14. Two years later, an invitation to join the Jazz Ensemble at Walla Walla Community College shifted her focus again and opened her mind and creativity to the jazz world. During this time she began performing regularly in the community as well as performing as a guest with the Walla Walla Valley Jazz Band and in events such as the annual Moonlight Serenade aboard the tallship, The Ledbetter. After dually graduating high-school and community college with her AA, she committed to a career in music and moved to Moscow, Idaho to go to the Lionel Hampton School of Music.

At LHSoM, she graduated with a Bachelor of Music in Classical Voice Performance studying under Pamela Bathurst. In addition to her classical studies, Lara was heavily involved in the Jazz program, continuing to perform in jazz combos and as the vocalist in Jazz Band I for several years. Beyond ensemble work, she studied jazz privately with Vern Sielert and Kate Skinner at the University of Idaho, as well as her dear mentor, Horace Alexander Young, just across the state border at Washington State University. While in school, she won the Outstanding College Vocal Soloist Award twice at the Lionel Hampton Jazz Festival in 2019 & 2020. Outside of academia, Lara gigged regularly within the Moscow/Pullman & Lewiston/Clarkston areas at a variety of venues. As a bandleader, she directed the Lara Vivian Quintet, Idaho Jazz Vandals, and even lead big bands on several occasions.

After her undergraduate degree and amongst a global pandemic, Lara packed up and moved to Las Vegas where she is a current music graduate student and part-time instructor at the University of Nevada, Las Vegas. She continues to study with incredible vocal-musicians Horace Alexander Young, Marion Powers, and Jobelle Yonely. Although the pandemic thwarted plans to record her debut original album Agent Orange before departing the pacific northwest, plans are underway to return and release this project in the near post-pandemic timeline.

With several years of private teaching experience, Lara Vivian currently resides in Las Vegas, Nevada where she teaches locally and online at-a-distance. She graduated with a Bachelor of Music in Vocal Performance from the Lionel Hampton School of Music in Moscow, where she taught privately and coached and trained professional vocalists in several local contemporary groups including The Palouse Project, Siren, and Vinyl Skies. Her musicianship also contributed to her work as Assistant Producer for the Palouse Project until her move to Las Vegas. In addition to her pedagogy work, in 2020 she earned her certification in Vocal Yoga (HLVYM), a voice teaching method invented by Los Angeles Vocologist Heather Lyle. Similarly, she completed the 2020 Certificate Course in Performing Arts Medicine for Voice Educators by the Performing Arts Medicine Association.

Teaching as a part-time instructor at the University of Nevada, Las Vegas, and the Nevada School of the Arts, she continues to prioritize the needs of her students modeling student-centered learning and artistic development. Her philosophy of teaching is to “cultivate a safe environment for every unique voice to explore and develop healthy vocal technique directed by the interests of the student”. She has experience performing and teaching within several vocal and musical styles including Contemporary Commercial Music, Jazz, Classical, Musical Theatre, as well as teaching kids and changing voices (adolescent).

In the coming year, she is earning her certification in teaching the LoVetri “Somatic Voicework” method, and plans on attending Shenandoah University’s “Contemporary Commercial Music Vocal Pedagogy Institute” in the Summer of 2021. She is currently in her second semester of the Jazz & Commercial Music Performance Masters Program at the University of Nevada, Las Vegas.

Lara Vivian Smith is a member of the Jazz Education Network, The Voice Foundation, and Performing Arts Medicine Association.