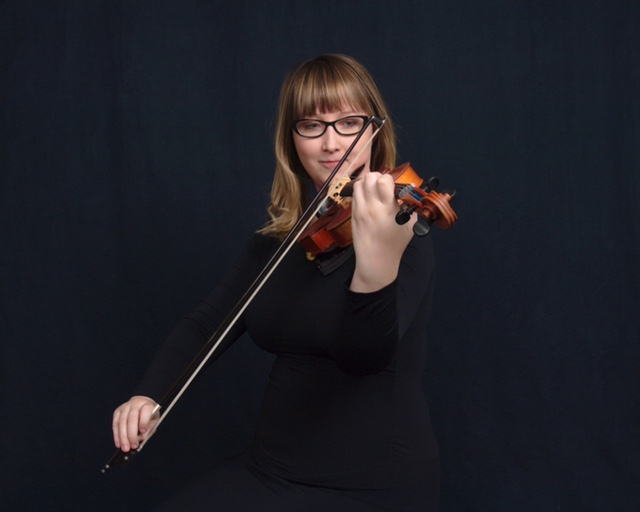 Kelly Wilcock was born and raised in Las Vegas. She started playing piano at age 10 and switched to violin at the age of 12 and fell in love with it. With the help of her teacher, De Ann Letourneau, Kelly was accepted into the Las Vegas Academy of the Arts. She earned superior ratings at Solo & Ensemble, participated in the CCSD Honor Orchestra, Nevada All-State Orchestra, the Las Vegas Youth Philharmonic, and started competing. Freshman and sophomore year, she spent her summers studying at the Indiana University String Academy and the Meadowmount School of Music. Senior year she won the Las Vegas Youth Philharmonic Solo Competition and performed the Barber Violin Concerto at Ham Hall. She also won the Senior Division of the Ennio Bolognini Competition. After graduating from the Las Vegas Academy of the Arts, she was admitted to the University of Cincinnati College-Conservatory of Music (CCM) for Violin Performance. Kelly developed such a love for teaching music and working with children that she changed her focus to Music Education and graduated with a Bachelor of Music from CCM.

Since completing her degree, Kelly has taught in private schools, charter schools, music stores, and homes in Ohio and Nevada. She has taught violin, viola, cello, bass, piano, percussion, choir, music theory, and general music. She received certificates from UNLV for Orff Levels I and II and completed Suzuki Teacher Training for violin books I and II at the Desert Suzuki Institute. In 2012, Kelly started working for The Smith Center and United Way as a Southern Nevada Wolf Trap Teaching Artist traveling across the valley teaching pre-school teachers how to integrate music into their lessons with 3-5 year old children. For the past four years, Kelly has been teaching Violin, General Music, and Middle School Orchestra to grades K-8 at Doral Academy, an arts integration charter school in Las Vegas.

As a performer, Kelly has played for weddings as a soloist and as a chamber musician at country clubs, Mandalay Bay, and the Flamingo. She has subbed with the Las Vegas Philharmonic, performed for the Latin Grammy Awards, and performed as a soloist at Marquee at the Cosmopolitan.

While she is humbled and proud of her own musical journey, Kelly is overwhelmed with pride for her own students’ success. Many have joined the CCSD Honor Orchestra, Las Vegas Youth Orchestra, received superior ratings at festivals, and have been accepted and graduated from Las Vegas Academy themselves. Getting to share her experience and help her students on their own musical careers has been the best part of being a violinist.

When Kelly is not performing or teaching, she likes to spend time with her family and friends, travel, and drink mocha frappuccinos from Starbucks.