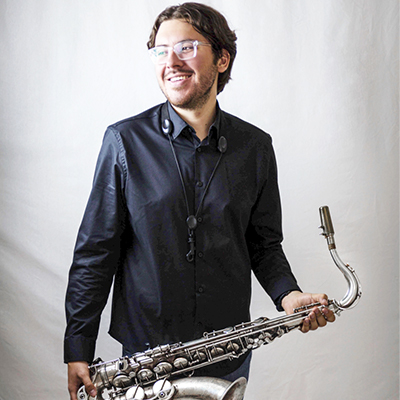 Carlos Mata-Alvarez holds a BM in Jazz Studies from the University of Nevada, Las Vegas & a MM in Jazz & Commercial Writing from the Frost School of Music. During his studies at UNLV his large & small ensemble compositions/arrangements were recorded & released commercially on three CD’s from 2013-2015. He received five Downbeat magazine student awards during this time including one for his arrangement of “All Blues” for Big Band featuring UNLV Jazz Ensemble I. In his final semester at UNLV during the Next Generation Jazz Festival he was awarded with an Outstanding Soloist Award for his solo work with the ensemble & on his own original arrangement of Coltrane’s “Central Park West”.

Carlos received a fellowship through the Henry Mancini Institute Orchestra to further pursue his studies in Miami, FL at the Frost School of Music. During his first semester he entered the International competition “Perform with Mintzer”, where he placed as a finalist on saxophone. He also was a finalist (2nd place) in the ASMAC (American Society of Music Arrangers & Composers) Bill Conti Big Band Competition for his original big band composition “Since You Went Away”. Carlos worked as a graduate assistant for the flagship commercial orchestra at the Frost School (HMI Orchestra), specifically as an assistant composer/arranger, librarian/copyist & social media coordinator for all of their concerts and events throughout the South Florida area. Carlos worked closely with Shelly Berg (Dean of the FSOM) – a Grammy nominated composer, pianist, TED speaker, and former head of Jazz Studies at USC – completing arrangements and orchestrations for guest artists such as Steve Miller, Jimmie Vaughan, Dave Grusin, Clint Holmes, Niki Haris, and Ann Hampton Callaway. While living in Miami, Carlos formed his own group (the CMA Miami Qtet) which premiered at some of the finest jazz clubs in South Florida including Lagniappe, Le Chat Noir, & the Arts Garage. He also frequently performed at other well-known commercial venues including the Arsht Center, Ball & Chain, the Fish House & worked as a freelance saxophonist & composer.

As a freelance professional in Vegas, he worked as a member of the house band for “A tribute to Ray Charles: Georgia on My Mind” at the Venetian which featured Clint Holmes, Kirk Whalum, Vocal Group Take 6, and Nnenna Freelon. He also worked as a sub for Las Vegas’ Classic nightly show “The Rat Pack is Back” at the Rio. He then played woodwinds for a new Disney produced musical titled “When you Wish” and the classic “Beauty and the Beast” at the Tuacahn Performing Arts Center in St. George, Utah. Carlos now frequently performs as a leader & sideman at the Dispensary Lounge Jazz Club, the E-String, the Sand Dollar, Red Rock Hotel & Casino, & the Smith Center among other popular music venues. He teaches jazz & commercial writing, saxophone, & piano at the UNLV School of Music & has also recently has been commissioned to write new pieces for schools throughout the Las Vegas valley. Carlos also worked as a sub on the hit production show at the Palazzo titled “BAZ – A musical tour de force”, playing the keyboard/woodwind chair, & is currently subbing the keyboard chair & woodwind chairs respectively, on “Vegas! The Show” at Planet Hollywood.